Two promotional blurbs have come in for my upcoming science-fiction novel about a first-contact, alien invasion of Earth with the working title of War of the Planet Burners. The book is scheduled to be published in early June by Moonshine Cove Publishing, and the blurbs will be printed on the back cover or inside the novel. 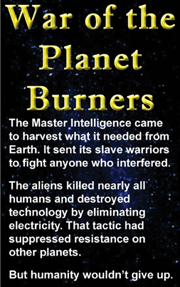 Both blurbs are from sci-fi writers with several books to their credit: Jane Lindskold, a New York Times best-selling author, and Craig L. Andrews, another Moonshine Cove author. The blurbs follow:

-- Jane Lindskold, author of the Artemis Awakening and Artemis Invaded series:
"War of the Planet Burners has the feel of classic post-disaster SF novels, such as John Wyndham's The Day of the Triffids, in which a small fragment of humanity struggles to survive against both technological challenges and genocidal, inhuman attackers."

-- Craig L. Andrews, author of Sky Fishing
"If you want to transport yourself into an expanse of space and time on planet Earth where technology has been ripped away and survival teeters on the knife edge of the impossible, you must read Dennis Herrick's War of the Planet Burners. Once you meet Joel, learn of his miraculous survival, see him clinging to threads of life along with others like him, you will need to follow him to the end of the conflict against the machine and those who mistakenly created it."

Posted by DennisHerrick at 5:22 PM