Two avid sci-fi fans who advised on my sci-fi novel, War of the Planet Burners, have also written blurbs that are in the book. They are as follows: 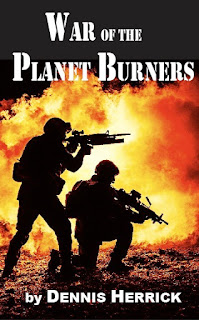 "War of the Planet Burners is an exciting Sci-Fi book about alien invasion of Earth and the desperation of a handful of human survivors fighting to avoid extinction in a world without electricity. An action-packed story that you won't be able to put down."
—Brian Gilmore, retired Navy captain and aviator

"War of the Planet Burners is science fiction at its best. A battle with interplanetary dimensions pits the brains and courage of Earth’s humans against an interplanetary force of a scientifically more advanced species in a struggle over who will ultimately own the small planet on which we live. Earth’s military and civilians combine resources, even though deprived of the majority of our current technology, in an exciting story that kept my interest all the way through. "
—Jack Ellis, retired Air Force officer and electrical engineer

The book was published first by a North Carolina publisher in 2016 with a second edition by the author. The title is available as ebook or paperback online.
Posted by DennisHerrick at 2:34 PM