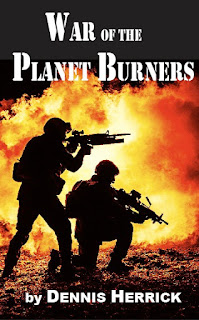 My latest book is a sci-fi novel titled War of the Planet Burners, about a first-conact alien invasion of Earth. But why did they come? And what are they after?
Here's a brief synopsis of the novel:
------
Humans fight extinction in War of the Planet Burners, a sci-fi thriller about interplanetary alien invasion in the near future.
The Master Intelligence came to harvest what it needed from Earth. It sent its slave warriors to fight anyone who resisted. The aliens killed nearly all humans and destroyed technology by eliminating electricity. That tactic had suppressed resistance on other inhabited planets.
But humanity wouldn't give up.
Sci-fi novelist Jane Lindskold wrote about the book:
"War of the Planet Burners has the feel of classic post-disaster SF novels, such as John Wyndham's The Day of the Triffids, in which a small fragment of humanity struggles to survive against both technological challenges and genocidal, inhuman attackers"
Posted by DennisHerrick at 5:51 PM